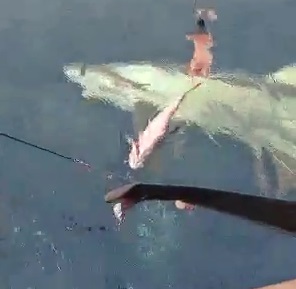 It has been a while since our last update and, as such, a slow start to the year, but we do have some exciting sightings. So far we’ve had reports of four great hammerheads, four nurse and four silky sharks. There was our first sharpnose shark caught from the Utila pier, a couple of lemon sharks from the East end of Roatán, and two unknown Carcharhinids. One of the nurse sharks had a genetic mutation that causes reduced skin pigmentation (also known as leucistic). It was recently sighted by the Aggressor and you can read more in this post. Our big news came from Guanaja, when fishers targeting deepwater snapper captured a bigeye thresher shark, Alopias superciliosus. The photo above was taken from the video provided by Anuar Romero, which can be viewed here.

In the meantime, we continue writing the report of all the sightings up to the end of 2021. Hopefully by our next update we will be able to share this with you. Until then keep reporting your sightings!